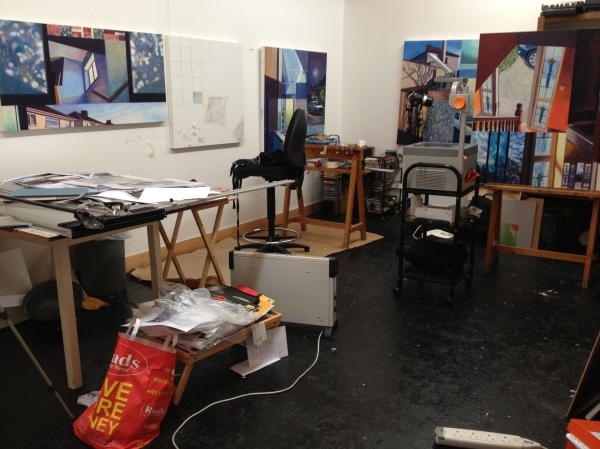 I have moved into a larger space at NAS with two large skylights. Just starting to put things on shelves! 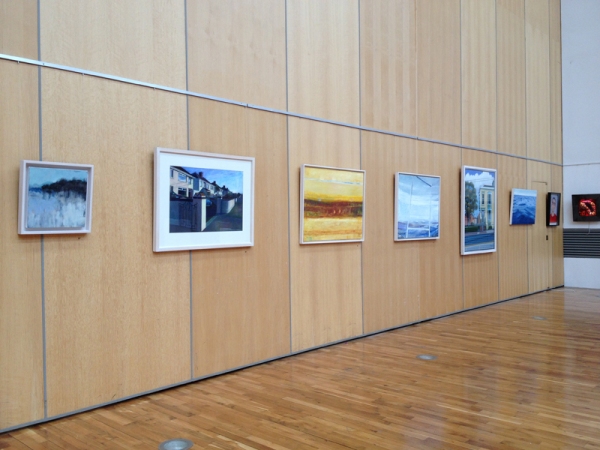 Mary Burke will be exhibiting in the DLR Open Exhibition at the Concourse Exhibition Space in County Hall, Dun Laoghaire from February 22nd to March 12th The submission process was open to artists who have studied in, are originally from, or are living or working in, the Dún Laoghaire-Rathdown area. The exhibition was selected by Dalkey resident and Director of Solomon Fine Art, Tara Murphy. The exhibition features a range of work including painting, print, photography and sculptue.“I was delighted with the excellent response to the Open Submission Exhibition this year. With almost 200 entrants and over 500 exhibits to choose from, having to whittle the list down to just 69 exhibits was a daunting but enjoyable task. With the invaluable help of the Arts Office I hope the final selection highlights both the outstanding local talent and the diverse range of media presented. With exceptional examples of painting, sculpture, photography, textiles, glass and ceramics on display, the Open Submission Exhibition is sure to be an unmissable and rewarding show in dlr County Council’s consistently engaging visual arts calendar.” Tara Murphy, Exhibition Selector.

A painting by Mary Burke from the UK National Art Collection can now be viewed online on the BBC website: Click here to view.

Work by Mary Burke can be viewed on the Cultures of the Suburbs website. Cultures of the Suburbs is an international Research Network established in 2011 and funded by the Leverhulme Trust. The Network is a partnership between the Universities of Exeter and Kingston(UK), Witwatersrand (South Africa), Hofstra (USA), Griffith (Australia) and the National University of Ireland, Maynooth, and its purpose is to support scholarly activities relating to the cultural life of the suburbs. 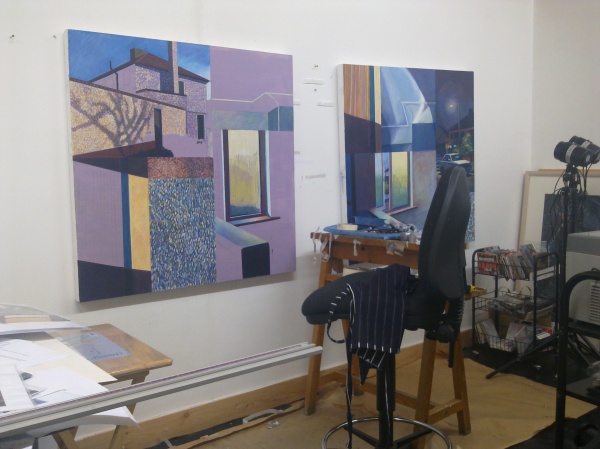 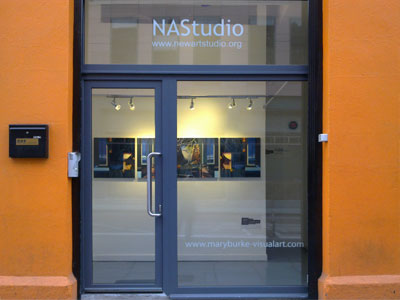 My work will on show in the NAS Studio Project Space until October 20th. 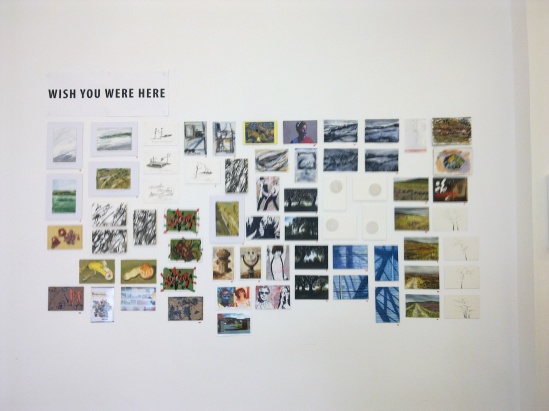 Our postcards were in great demand on Culture Night!

Had a great time visiting ghost estates this summer. Got lots of material for new work!

Drop in and view NAS Studio on Culture Night.
View work in progress in the artists studios as well as two exhibitions in the ground floor exhibition spaces.
Friday September 21st (we are open from 6pm to 10 pm.)
NAS Studio 2-3 Mary’s Abbey, (off Capel Street, Dublin7.

My work can be seen in two exhibitions at NAS next month. Wish You Were Here is a fundraiser postcard exhibition at the NAS Project Space 2-3 Mary’s Abbey, featuring postcard size works by studio artists. Ensemble is a large group exhibition of work by NAS artists to be held at no. 4 Mary’s Abbey. Both exhibitions will open on Friday September 21st to coinside of Dublin Culture Night. Our studios will also be open to the public on Culture Night. Visitors welcome!

Visit us on Culture Night 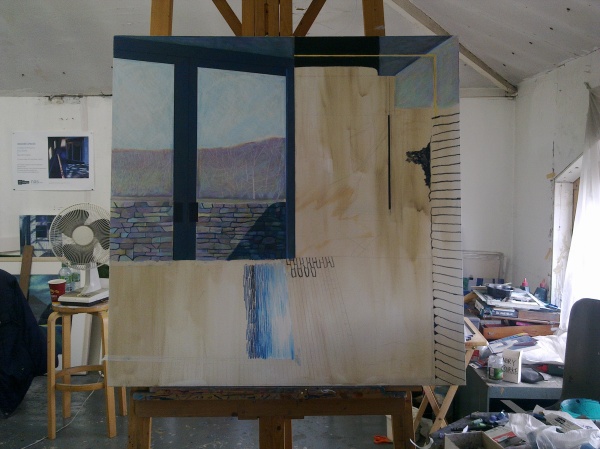 The Start of a new painting! 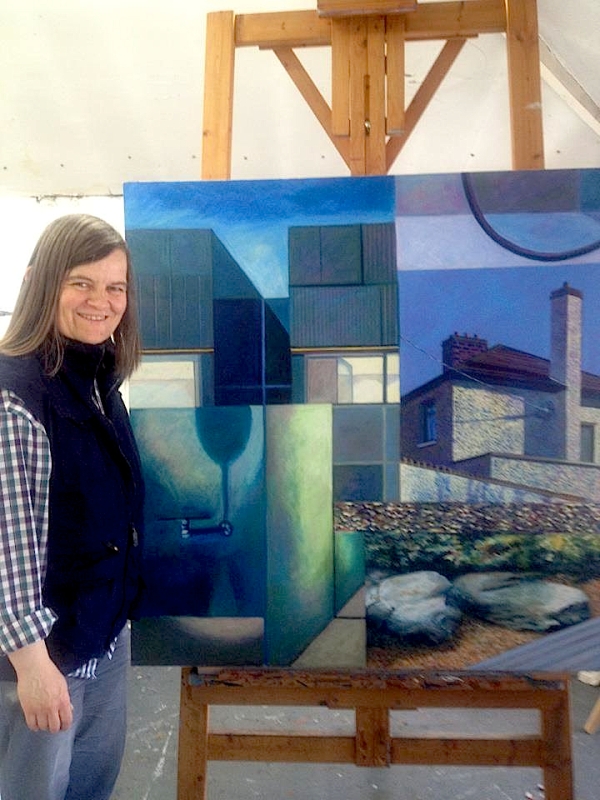 New Art Studio will be participating in LINK CULTUREFEST, a weekend festival that aims to showcase and celebrate the culture, art and people that make up the diverse community that exists in Smithfield and its surrounding areas. Between the 25th and the 27th of May LINK CULTUREFEST will host a series of events for the public, participating artists and curators. The three day programme will feature Art Exhibitions, Live Concerts, Open Studios, Artist Talks, Live Street Art, Outdoor Screenings and Performances. LINK CULTUREFEST is co-ordinated by BLOCK T in partnership with studios including New Art Studio, The Joinery, d.ploy/bio.space 033, The Complex, Market Studios, Supafast Building,Ormond Studios, Brunswick Mill Studios, Flatpack Studios, The Chancery Studios, The Visual Arts Centre, The Little Green St. Gallery and Loom Studios. LINK CULTUREFEST is kindly supported by Dublin City Council, The Arts Council, The French Embassy in Ireland and Smithfield Area Business Association.

View my work in the Linked Exhibition at BLOCK B in Smithfiled Square (opening on May 25th) and The Keep Us Posted Exhibition which opens on May 26th. Visit me at my studio at NAS (2-3 Marys Abbey, Dublin 7) on Sunday May 27th from 12 – 5 pm.

My work will be exhibited at the Keep Us Posted Exhibition in Blobk B, Smithfiled, Dublin 7

View my work at BLOCK B in Smithfiled and visit my studio at New Art Studio, 2-3 Mary’s Abbey, off Capel Street on Sunday 12 – 6pm

Work by studio artists is continuously on display at our projectspace@NAS. Check us out at 2-3 Mary’s Abbey, Dublin7.

Mary Burke will be exhibiting new work at projectspace@NAS from September 29th. The title of her exhibition is Panorama. Watch this space for further details!

A productive January in the studio!

We now have a permanent display area at New Art Studio – projectspace@NAS. There will be continuous rotating exhibitions of work by studio and invited artists. Work will be on show from December 15th.

Mary Burke’s books can be viewed and purchased at Dublin Art Book Fair and Magazine Archive which will take place at Temple Bar Gallery, Dublin from December 2nd to December 4th.

Check out my books here!

Check out the catalogue here

The artists of New Arts Studio will be staging a group exhibition Miscellany in the showroom on the ground floor. The studios upstairs will also be open to the public from 6 pm on September 23rd. Artists exhibiting in Miscellany include: Mary Burke. Frank Carty,Jackie Duignan,Tim Elford, Aidan Mc Dermott, Bernie Masterson, Margaret O’Hagan,Ger O’Reilly Hynes, Karen Ryan and Niall Wright.

A New Book SPACES and PLACES: A Suburban Art Trail was launched in Tallaght on September 15th.

“Mary Burke’s Suburban Art Trail takes the viewer on a physical journey through six public spaces in Jobstown,Tallaght, where a series of her paintings on the theme of suburbia were displayed individually. The venues were; a medical centre, an adult education centre, a church, a primary and secondary school and a community education centre. In addition paintings were placed in four private houses to be viewed by family and friends.
The Suburban Art Trail was curated with residents from Jobstown, West Tallaght and coordinated by Tallaght Community Arts in partnership with Mary Burke.”

Mary Burke will be exhibiting her solo exhibition IMAGINED SPACES at New Art Studio, Dublin in September. The exhibition will include works shown at RUA RED earlier this year along side some new works. The exhibition opens on Thursday September 1st and continues until September 12th.

Mary Burke will be teaching two courses in CEAD at NCAD this autumn.

Mary Burke will be teaching the following courses in NCAD during the month of July:

Mary Burke has two works included in LEVEL, a group exhibition curated by Bernadette Madden, at the Dunamaise Arts Centre. The Exhibition opened on June 17th and continues until July 30th.

28 pieces have been selected, including work by Cora O’Brien, Brendan O’Flaherty, Bernie Masterson, Bennie Reilly, Conor Walton, Aoife Barrett, Stephen Lawlor, Joe Dunne, Bridget Flinn, Mary Burke, Eoin MacLochlainn, Lorraine Walsh, Myra Jago, Paul MacCormaic, Heidi Nguyen, Mairia O’Brien, Angela Fewer, Eileen Mills and Balazs Keresztury. Entry to the exhibition is free and all members of the public are invited to the gallery to take a look at the work. Dunamaise Art Centre also want to hear what you think-please fill out one of the comment slips and choose your favourite work. They will present an Audience Award to the piece that gets the highest votes!

In February Mary Burke gave a talk and presentation on SPACES and PLACES to students at Marino Institute of Education, Dublin, as part of their Art, Culture and Education week. The students used the exhibition as a starting point for their own night-time photographic project. Some examples of their work can now be seen here.

Mary Burke will undertake a residency at Cloverhill Prison, Dublin. This residency is funded under the Arts Council Artists in Prisons Scheme and will be of two weeks duration.

Mary Burke’s work can now be viewed on Art Slant

Check them out here!

Mary Burke gave a talk and presentation on SPACES and PLACES to students at Marino Institute of Education, Dublin. The students used the exhibition as a starting point for their own photographic project.

Mary Burke: SPACES and PLACES – Suburban Art Trail The Suburban Art Trail is curated with residents from Jobstown, West Tallaght and has been coordinated by Tallaght Community Arts in partnership with Mary Burke. Selected works on the theme of Suburbia are dispayed at the following venues. Mary Mercy Health Centre, An Cosan Centre, St Thomas’ Parish Church, St Thomas’ National School, Youth Horizons Education Centre and Mount Seskin Community College. This will be launched at An Cosan Centre, Fortunestown Road, at Jobstown, Tallaght on Monday January 31st at 2.30 pm. All welcome! The Suburban Art Trail continues until February 25th.

View the show on Flicker!

The artists opened their doors to the public on September 24th from 6pm to 10.00 pm. This provided a rare opportunity to look behind the scenes and see how artwork is created and to meet the artists.There was also be an exhibition on the ground floor. The ‘Square Show’ featured works by studio artists and associates. Each artist was asked to exhibit between one and three works. Each work was 30 cm square in size. The works are for sale and the exhibition will continue until Sunday October 3rd.

Mary Burke gave a talk and demonstration on the medium of Oil Pastel in the gallery on August 20th prior to the exhibition opening.

View photos of the opening on Flicker!

Mary Burke will exhibit at the 2010 Boyle Arts Festival from July 22nd to July 31st 2010. Click here for further details:

Mary Burke will be teaching the following courses in NCAD during the month of July:

Each course runs for 5 full days. Check out the college websites for booking details. (NCAD and IADT)

Mary Burke’s work ‘Wing Mirror’ was sold in the Art Auction for Haiti which was organised by de Veres Art Auctions and held at the D4 Ballsbridge Court Hotel, Lansdowne Road, Dublin 4 on April 26th. All proceeds go to the Haiti Appeal.

Mary Burke completed an Arts Council Artists in Prison Residency in the Training Unit Prison at Mountjoy, Dublin. The objective of this residency was to introduce students to Colour Theory.

Invited to exhibit at the Boyle Arts Festival 2010. The festival is in it’s 21st year and will open on Thursday July 22nd 2010. Mary Burke is represented in the Boyle Civic Collection.

Mary Burke’s painting Evening Shadows 2 will appear on the cover of a new book: Suburban Affiliations – Social Relations in the Greater Dublin Area. It’s authors are Mary P. Corcoran, Jane Gray and Michael Peilon. The book is due to be published in April 2010 by Syracuse University Press in the United States and in Ireland by University College Dublin Press.Click here for further details:

Invited to exhibit work in the Christmas Exhibition at the Cavehill Gallery, Belfast. The exhibition opened on December 3rd and continued until December 19th 2009.

NAS Studio was open to the public on Culture Night, Friday September 25th 2009. This provided a rare opportunity to look behind the scenes, see how artwork is created, and to meet the artists. There 14 artists (11 full members and 3 associate members). Current members are Anna Boyle, David Browne, Mary Burke, Eithne Carr, Francis Carty, Tim Elford, Ann Lynch, Maggie Madden, Bernie Masterson, Aidan McDermott, Mark O’Kelly, Ger O’Reilly, Karen Ryan and Niall Wright. There was an exhibition of finished works on the first floor of the building. The night was a great success. We had almost 200 visitors. See photos on the Studio Website!

Completed a two week Arts Council ‘Artists in Prisons’ residency at the Training Unit at Mountjoy, Dublin in April 2009. The objectives of this residency were to introduce students to the not widely used medium of Oil Pastel and to demonstrate the possibilities of combining this meduim with other media in addition to using it as a stand alone medium.